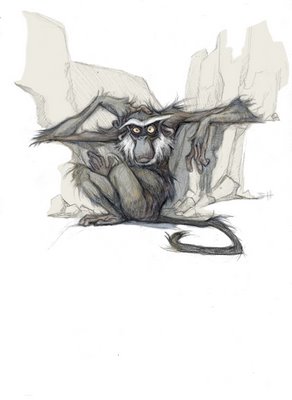 This week's topic in Toon Club is, "IF MONKEY'S RULED THE WORLD."

I had a few different ideas. One was evolution reversed, starting with humans eventually turning into monkeys. That still might be fun to do. Then I wanted to do a presidential debate ending in poop flinging, but I have an aversion to poop that keeps me from drawing it. I appreciate it when others refrain from expounding on the subject, too, so I thought it rather considerate of me to stop that idea's progress right there. It's even hard to type the word "poop"; (shudders). Then this monkey came out of the pencil, and it's anti-climactic statement won me over. So now we know what would happen if monkeys ruled the world. Hooray! Now get back to your ruling, and stay away from the poop.
Posted by Seth Hippen at 5:38 PM

I just stared at this one for a while... the more I look at it, the more I see in it that I love. The chaos of the hair is great... and the fingers and feet... and the pose... excellent. You're quite an artist, sir. Keep it up, and publish a sketchbook. I'll buy 40.

I love your artwork. It´s really amazing!
Thank you for the comment. :)

this is fantastic! I really really like this. man, its so cool! his pose!! his espression! the detail!! he has so much character... haha man, it makes me laugh :D

Hey Seth,
I really really really like this one:) Awesome design with great expression and I love the rough lines with subtle colors.

Great work ! Would love to see this guy in movement.

Tremendous sketchery, Seth. The line quality and those hands are fantastic.

Very cool.
Thanks for sharing.

beautiful ghost down below! I love it!

oh, and the monkey rox too!

great monkey, and I also love the ghost,please show us some more

Seth Hippen
I'm a character animator at Blue Sky Studios. How did I get so lucky?